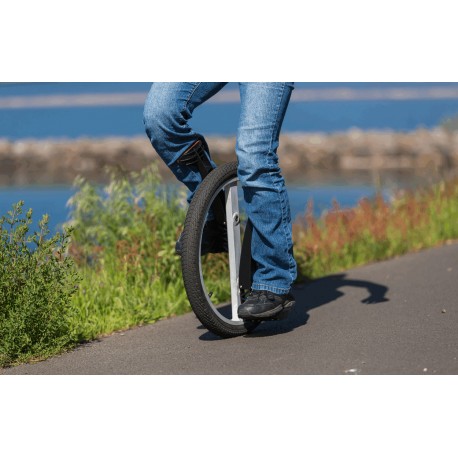 Riding a unicycle is a bit like juggling with bagpipes. Some people find it impossible to learn, it takes too long and it becomes tedious, but other people take it as a challenge which they just have to overcome.

The Lunicycle is much easier than a traditional unicycle for two particular reasons.

First of all, the 20-inch wheel is slightly oval, which compensates for the zero point which thrusts you forward after each pedal revolution. When your feet are at 12 o’clock and 6 o’clock the longest part of the oval has just passed its zero point, so you remain stable.

Then, the Lunicycle doesn’t have a seat, allowing your pelvis to move freely. The addition of calf rests on the pedal extensions enable you to keep the Lunicycle between your legs, making the pedalling movement similar to walking.